Sqn-Ldr Richard Robert [Dick] PURDIE M.B.E.(Mil), VK2ARP (VK2RP) my father, was a professional radio operator / telegraphist and a certified "First Class" wireless operator who had enlisted in the Royal Australian Navy (RAN) during WW1 on 3rd March, 1918 as a boy of 15 years. His service number was 6433. Here is the National Archives of Australia digital copy of the front page of his Naval Record. This is the other side of his Naval Record.

Dick remained in the RAN until 1927 when paying-off to establish his own radio business. This business, like so many others, foundered during the great depression. He was immediately able to obtain work as a telegraphist around a number of outback N.S.W. Post Offices employed by the Postmaster Generals Dept., handling all kinds of traffic at high speeds.

Owing to his skills and naval technical background he was induced to join the newly formed Royal Australian Air Force (RAAF) on 6th May, 1930 as a wireless operator. During WW11 he was part of MacArthur's famed RAAF signals intelligence unit.

At the conclusion of WW11 Dad was posted to 143 RADAR Unit.

During WW11, Mum and Dad did find some time for recreation. I understand this photo was taken outside Randwick Racecourse some time in the latter half of 1941 when mum was pregnant with me. Stern and stiff-backed as ever, a rigid disciplinarian.

Just before war broke out in September 1939, Dad was a Warrant Officer stationed in Victoria Barracks in Melbourne. He simply went to work one day and Mum never saw him again for a long time. Initially he was engaged in supporting Victorian Police interning German Aliens. He then moved to Parkes in N.S.W. where they set up training Wireless-Air-Gunners [WAG's] for the Empire Air Training Scheme.

Out of one such large class not one Wireless Air Gunner returned from the European War... Without fail every Anzac Day [25th April] eve Dad would get out the very wide autographed sepia graduation photo of that class and sit silently all by himself at the dining room table with a quite drink to himself and those "absent friends" - I swear he had tears in his eyes. 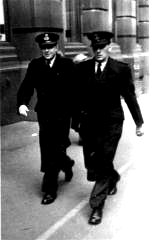 On a humourous note, when war was declared he was told to round up every qualified radio operator he could lay his hands on to assist with the expected influx of trainees. Dad duly enlisted into the R.A.A.F. quite a number competent ham operators, most from WW1.

Unfortunately, too many were minus a leg, an arm, an eye or whatever. Didn't make any difference to Dad, these guys were the "ants pants", highly competent, military background and best of all, experienced "elmers".

Unfortunately the Commanding Officer didn't quite see it that way, discharged them all with a letter of grateful thanks and gave Dad a giant rocket. He told the old boy: "If we're that desperate then God help us..."

My niece kindly scanned these photos for me. The one upper left is Dad with a fellow officer in, I think, Martin Place Sydney. The year I don't know but it would be our winter and certainly 1943 or earlier.

Later winters he was on Moratai in the south-west Pacific, landed 6th June, 1944 [coincidence?], dodging air raids and being cared for by his personal Japanese POW's. They were two Japanese Naval Radio Operator's Dad and his American counterpart had "saved". They were all amateur radio operators and had worked one another in the years before WW11. Strange world... Curiously they also didn't rely upon air raid sirens - they had been adopted by a fox terrier dog who could hear approaching Japanese bombers long before the air raid sirens. If the dog yelped on his race to the trenches - then you quickly followed suit.

Somewhere there exists a photograph of my father and his American friend receiving their morning shave from these two Japanese Naval Radio Operators. Interestingly, the US Marines considered my father and his friend to be totally "crazy". I'll try and locate it!

Dick felt duty bound to voluntarily remain with the RAAF until the end of the Korean War - his colleagues sensibly didn't - thereby earning him the very unique distinction of having served Australia throughout three wars. As a consequence he severely prejudiced his own retirement prospects with a certain job placement with the Department of Civil Aviation as an Engineer [Radar] as radar was being installed across civilian air ports. They wouldn't take anyone over a certain age though and he sadly missed out. He always regretted that decision.

In 1954 HM Queen Elizabeth 11 personally presented my father with his decoration medal in the Order of the British Empire [M.B.E. (Military)] for services to Australia in general and Wireless in particular at Government House Sydney on the Queen's first visit to Australia. - See his medals to left.

Here is Dad's listing in our national WW2 Honours Roll.

Update 29th July, 2020: I finally got around to organising a replica set of my Dad's military (RAAF) decoration, and other medals. Eleven all told.

I purchased these for my daughters [very grown up] and grand-children to take turns in wearing on our solemn ANZAC Day.

Regrettably I had to advise my Dad many years before he passed away to have his medals buried with him to avoid a family dispute between older siblings. These medals include two he never bothered to claim and have mounted.

Here is a listing of each medal and what they mean.

His later years were spent as a Postmaster, principally in our home town of Pendle Hill N.S.W. Dick was then to be forcibly retired, literally, on the spot when management accidentally discovered he was celebrating his 72nd birthday - compulsory retirement age was 65 years. The finks...

A very remarkable man who really was a man among men - raised largely by aboriginal folks on an outback Queensland cattle station where life was indeed very hard in the early days of the 20th century - then to run away and finally join the Australian Navy as a fifteen year old kid. We once wondered who had forged his father's consent signature until I saw a copy of his navy application form. By age twelve he was able to write in perfect copper plate handwriting taught by his mother, and later by his maiden aunts - he simply filled out the form himself, signed it, and everyone automatically assumed it was his father's handwriting - not some fifteen year old kid. Has copperplate handwriting only began to deteriorate when Dad was in his late 70's.

The final years were regular skeds with old navy and air force pals until they all disappeared one by one. As his son, my saddest moment was fulfilling an obligation to notify all those listed in his "book" of his passing - there was no one left - he was the last of the "originals". 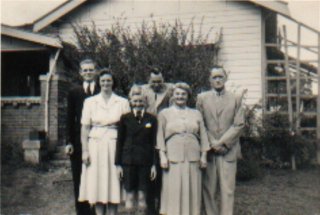 The photo above was taken around 1952 by my brother-in-law with the trusty box brownie and is my brother Barry [in R.A.N. uniform], my sister Joan, myself [VK2TIP NOW] aged 10, my eldest brother Ken [deceased R.A.N.] acting "the fool" [out of R.A.N. uniform], my dear old Mum Elsie, originally from Wolverhampton, England and finally Dad VK2ARP.

That is my sister and brother-in-law's house in the background, then a poultry farm on acreage, now residential lots with a freeway through the back and a six lane highway in front. Progress... My sister, a widow, continues to live about 100 or so metres up the road.

Tragically for us, my eldest brother Chief Petty Officer Ken C. Purdie died some eight years later [April, 1960] while still serving in the R.A.N. and was buried at sea somewhere off Aden. He had also served in Korea.

Another great Australian, who was highly decorated and wrote the book "Hells Bells and Mademoiselles" was Joe Maxwell V.C. Here's my Book Review Page on that book [incomplete]

[UPDATE] Like so many people, I am researching my family tree. Details I know of my Grand Father, Robert Purdie are that he was born in Ayrshire, Scotland in 1837 [yes that's right] and died in Clermont, Queensland, Australia on 8th April, 1923. I believe he migrated to Australia around about 1865. He lived to be the same age as my Dad i.e. 87 years.

My Grand Mother was Jeannie Jones but I have no further details except when they married, Robert was 65 and Jeannie was about 27. Yep...

Want to know more about this site?

the author Ian C. Purdie, VK2TIP of www.electronics-tutorials.com asserts the moral right to be identified as the author of this web site and all contents herein. Copyright © 2004, all rights reserved. See copying and links. These electronic tutorials are provided for individual private use and the author assumes no liability whatsoever for the application, use, misuse, of any of these projects or electronics tutorials that may result in the direct or indirect damage or loss that comes from these projects or tutorials. All materials are provided for free private and public use.
Commercial use prohibited without prior written permission from www.electronics-tutorials.com